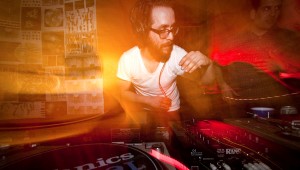 New Yorker Brian Shimkovitz was doing research in Ghana on a Fulbright scholarship, when his curiosity drove him deep into the enormous collections of cassettes sold by street vendors in West Africa. This was obscure music, previously unknown to his ears. Shimkovitz discovered one gem after the other, and soon started a blog named Awesome Tapes From Africa where he would share his finds, everything from ancient high life recordings to contemporary electronic pop tunes. The blog was a success and immediately gained a large following. Shimkovitz continued seaching for those hissing old tapes, but now on the whole African continent, digging through crates full of odd pop music previously only known by local fans. Six years have passed since the start, Awesome Tapes From Africa is now also the name of a record label, and Brian Shimkovitz is now a dj with gigs all over the world. He mostly plays straight from tape, considering the risks of technical problems such as jammed tape a part of the fun. Does it sound less than professional? Better rethink: Awesome Tapes from Africa plays international festivals such as All Tomorrows Parties, and has participated at music events at the Musee du Quai Branly in Paris and Berlin’s Worldtronics Festival. Check out http://www.awesometapes.com