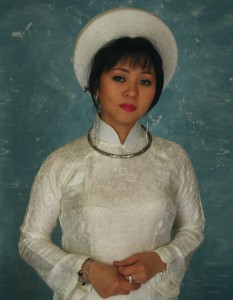 Sometimes life in exil, thousands of miles from the the land and culture one grew up in, can strengthen the connection to that particular part of ”home” that is always there, inside oneself. Music for instance. This is definitely the case with Huong Thanh, singer and founder of the group Camkytiwa.

Thanh grew up in a family of traveling Cai Luong musicians (Cai Luon being a sort of opera mixed with folk tunes) in Vietnam. She moved to France as a teenager and started performing Cai Luong music for the Vietnamese minority of Paris. Her audience grew and she would soon be famous in many European countries for her authetic and beautiful versions of the old songs. Lullabies,songs for work and for various rituals and ceremonies: they all became parts of a rich repertoir that Huong Thanh has built over three decades. They are songs that are tightly connected with the unglamorous every day life in Vietnamese farming communities; songs that could soon be forgotten, not only by people in exile, but also as a result of urbanization and modernization of Vietnam.

Huong Thanh decided to not only to conserve this musical tradition from her childhood, she also vowed to be a part of its development which she has done in many cross-genre colaborations such as one with jazz guitarist Nguyen Le and another with North African musicians.

Camkytiwa is the name Huong Thanh’s current project: Here she colaborates with three women from other East Asian countries: Etsuko Chida n the Japanese string instrument Koto, Yan Li from China plays the erhu – a two stringed, bowed instrument, and Korean E’Joung Ju plays the string instrument geomungo. It is a unique combination of instruments from different regions, of repertoirs and of styles of playing – unique and surprisingly harmonic. As the lonesome tonal glissandi of these ancient instruments surround Huong Thanh’s beautifully pentatonic voice, it is tempting from time to time to think of how there seems to be a kind of Eastern exile blues in there somewhere.