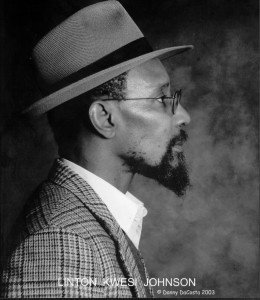 LKJ was born in Jamaica but moved to London with his family in 1963, where he would eventually become a central figure in the carribean subculture. For a while he was a member of the Brittish section of the Black Panther movement, arranging poetry workshops and working with Rasta Love: a group of poets and percussionists.

Reggae and dub music slowly found its way into the mainstream of Brittish popular culture through musicians like The Clash in the early eightees. LKJ released records like Bass Culture and LKJ In Dub at this time. He had signed a deal with major label Island Records, and his audience was growing significantly.

In spite of often being described as the inventor of the term Dub Poetry as a name of the specific hybrid of toasted declamation and reggae music that carribean Djs in London started making in the mid-seventees – an artform which is often thought to have laid the foundation for brittish hip hop – LKJ does not want to put that label on his work: for him words always come first, and music is added once the text is finished.

LKJ was the first black poet to have his selected work published by Penguin Classics. Here, next to writers such as Shakespeare and Chaucer, he continues to question the politics of the written word – who is allowed to use the English language and how? His poems are often in Jamaican English: the language of the black working class.

Most of LKJ’s poetry talks about the black Jamaican experience in the United Kingdom, everyday life as seen in the streets of London’s poorer neighborhoods. As for example in Inglan is a Bitch. ”Writing is a political act and poetry a cultural weapon”, he said in an interview. He recites his lyrics to music created in colaboration with dub master Dennis Bovell. LKJ rarely performs live, so don’t miss the opportunity to see this legendary and amazing wordsmith at Clandestino Festival.