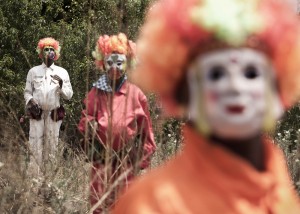 Question: What goes bleep bloop like an 8 bit video game, wears orange colored whigs and dances faster than 180 BPM? Answer: Shangaan Electro. The name of both a musical style and a group from Johannesburg.

Synthetic marimba licks. Soulful singing on top of a grid of outrageously maxed electronic beats. It sounds as if Super Mario ate one too many mushrooms, went down one of those green pipes and came out in a South African shanty town: A humoruos, mega artificial dance music saturated by plenty of harmful coloring agents and lots of call and respons chanting. And at the same time a hyper local music, made and consumed by the Shangaan people who live around the cities of Johannesburg and Limpopo – one of the most marginalized groups in South Africa.

The epicenter of the movement is in Soweto: Producer Richard ”The Dog” Mthethwa runs the operation from a small room next to his kitchen. It is here that he writes, sings, produces and organizes Shangaan Electro. ”I even copy the cassettes myself and silk screen the covers”, he writes on his website.

The obscure music scene suddenly became viral around 2010 thanks to some videos that Mththwa made. Wills Glasspiegel of Afropop Worldwide found them on the Internet late one evening in his Brooklyn home. He became obsessed with the idea of releasing a compilation and flew to Johannesburg where he met with Mthethwa. Record label Honest Jon’s soon put out the compilation, entitled ”Shangaan Electro”, and is releasing a sequel this year: a collection of remixes called ”Shangaan Shake”. The local underdog music was suddenly on just the right turntables at the right time, as ears from around the world turned curiously towards African electronic pop.

The live band Shangaan Electro consists of The Dog himself – Richard Mthethwa – on vocals and keyboards, the group Tshetsha Boys who perform wearing clowns masks the singers Tiyiselani och Nkata Mawewe and a group of dancers.