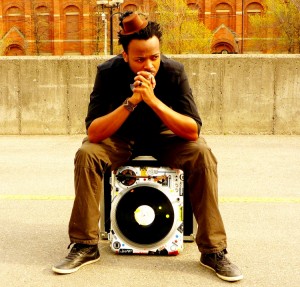 Toronto-based turntable artist Cheldon Paterson, alias SlowPitch, is a boundless sonic explorer of towering technical proficiency. He’s fascinated by the interplay between sound, movement, and live performance – where the public’s response acts as an integral component that impresses each singular performance. Over the years, he’s been nominated for the K.M. Hunter Artist Award for Music and received grants from the Toronto, Ontario, and Canada Arts Councils. This year he played at the esteemed Mutek Electronic Music Festival in Montreal and has performed at the TIFF Bell Lightbox, Music Gallery, Royal Ontario Museum, Gardiner Museum and the Harbour Front Centre to name a few. He is also a founding member of revered experimental turntable band INSIDEaMiND. As SlowPitch he has released two projects RPLCMNT and Biosphere Stargaze, both offering an eclectic array of improvised turntable sound manipulation and science fiction inspired rhythmic production sure to carry you through to another cosmic universe.