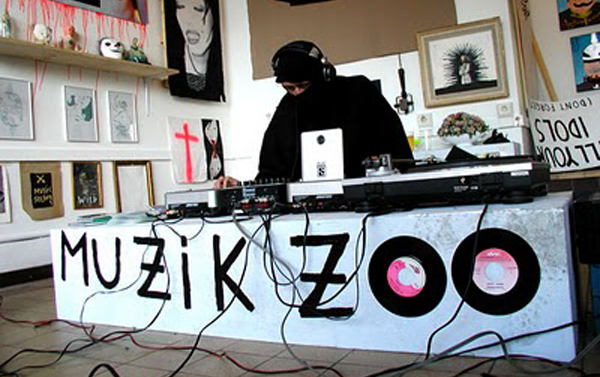 Thai beat, Turkish psych, tropicalia, Syrian techno, Arabic chaabi, cumbia, Iraqi Choubi, Balkan bass … the world is a juicy, danceable oyster about to overflow and splash down all of Clandestino Botnik festival in a deliciously salty dance afrodisiac. Strange sounds and rhythms mixed together in a highly contemporary, electrified plastic explosive. Or as Lowdjo himself puts it: “I like a lot of different music.”

He played locally in various punk bands during his teens but it was in his 20s, when he moved to Brussels, that Lowdjo’s record collection expanded rapidly and he began djing a the city’s clubs. It was a time of experimentation in the borderland between rhythmic music and raw, electronic noise; hypnotic drones met breakcore, jungle and electronica. He collaborated with Foton Records and other underground music collectives, and soon played all over Europe, along with the likes of Einstürzende Neubauten, Coil, Peaches, Emir Kusturica & His No Smoking Orchestra, Patric Catani, Guido Möbius and many others. Lowdjo also performs under many other aliases, including DJ Fiësto when he presents special dj sessions for children.