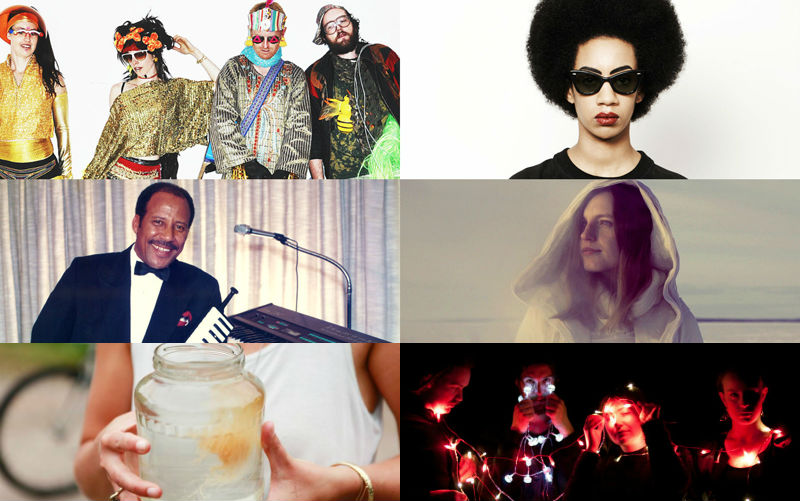 HAILU MERGIA (WITH TONY BUCK AND MIKE MAJKOWSKI)
He belonged to Addis Ababa’s musical elite and played with legends such as Mulatu Astatke. A regime shift changed everything, and in the eighties Hailu Mergia found himself in Washington DC, where he took a job as a taxi driver. Music was the link to his homeland Ethiopia, Mergia recorded lots of cassettes with accordion, synth and drum machine – basically jazz as known from the “Ethiopiques” compilations, but this strangely futuristic and taken out of context, which aired it out from a single satellite in the universe. Current Album at Awesome Tapes From Africa. | Read more

ORCHESTRA OF SPHERES
Orchestra of Spheres – Channeling ancient future funk from the IS! Warping spatioelastoplasticity with sound! Born out of Wellington’s Frederick Street Sound and Light Exploration Society in 2009, the Spheres have developed a cult-like following in New Zealand. Playing house parties, dance parties, DIY shows and opera houses, the Spheres have built a reputation for musically and visually ecstatic live shows. | Read more

LAU NAU
Lau Nau is the pseudonym of Laura Naukkarinen. She is a Finnish musician and artist who gained international acclaim for her original and minimalist compositions produced on everything from electric guitar and loop pedal to wine glasses and megaphone. The style is sometimes reffered to as Psych Folk, but it is impossible to determine the genre Lau Nau works in, a music that is as playfully simple as it is original. | Read more

ELENA WOLAY
A dj who organizes Jazz Är Farligt, a club, management, fanzine and record label. She also works with clubs and live venues like Fredagar på Marie Laveau, Mother and Elena Presenterar, Tantklubben, Cosmic Hysteria, Pådrag and others. She prepares herself for Clandestino Festival Winter Edition by digging deep into their sound archives for East African groove, rituals and bebop. | Read more

LES GLANEUSES
Insects, jellyfish, video loops of dance steps … just to name a few of the things the artist group Les Glaneuses presented during this year’s Clandestino Festivals. Materials are available everywhere. Les Glaneuses borrow them and put them into another world – and then again let them plunge into freedom. | Read more