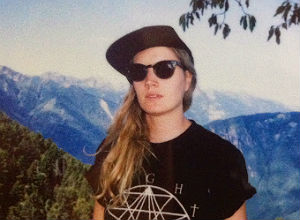 She was born at -27 C° on the 17th of December 1983. At the time radios were playing Michael Jackson, The Police, Bonnie Tyler, Culture Club and “Sweet dreams” by Eurythmics. Music that went straight through the umbilical cord. Hot on the inside and cold on the outside.

She built piece by piece an Austin Healey, she grew up with two brown bears, she moved by boat or floatplane. Then she moved to Switzerland. She studied economy and graphic design, ending up filmmaker.