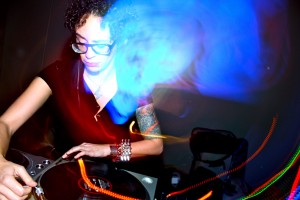 The Jamaican soundsystem is more than a collection of musical equipment, or musical equipment plus a DJ and his records. Soundsystems are living moments of creative collaboration. The soundsystem is the organizing force in Jamaican music-making, and through understanding them we can see how they, as Jamaican popular music in practice, are sites of resistance to colonial and commodity-based attitudes towards Jamaican culture as exemplified by local and international copyright law.

In the soundsystem, music arises out of a dynamic interaction between music recordings, the DJ who selects them, the (human-designed) sound equipment that broadcasts them, and the audience who are not passive receivers but active interpreters, critics and musical collaborators. Jamaicans value this dynamic interaction, and it leads to some fantastic music, but this value and the process that generates it, is not well recognized by copyright law, which relies on strict conceptual separation between “authors” and consumers,” and which depends mostly on charging for use of musical recordings. However, Jamaican and international organizations promote copyright law as a costless benefit to artists and creativity.

Although music recordings are an important source of money from outside Jamaica, the Jamaican creative process relates to musical recordings as by products or inputs in a music-making process that crystallizes in the sound system event. Many Jamaican musical objects/traditions suggest this: for example most Jamaican recordings in the 1970s and 80s were released as a vinyl record with a full song on one side, and an instrumental “version” or “riddim” on the other side, which meant that other performers could sing their own lyrics on top of the same instrumental track.

DJ Ripley / Larisa Mann will not only be participating as a DJ at Clandestino Festival, but also give a talk about exiled cultural activities.These events are often not seen as revolutionary either by more mainstream political movements and organizers, or by the state or elites, who prefer to police them in relation to concepts of propriety and property. What can we learn from the squat party, the gay ballroom, the Jamaican street dance that could inform spaces of resistance such as Occupy Wall Street and Occupy Oakland?