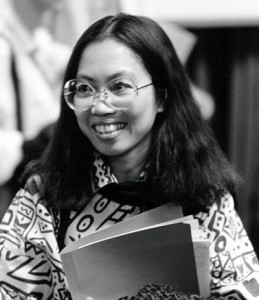 The boundary event, which has been the focus of research published in Trinh T Minh-ha’s latest book, Elsewhere, Within Here – Immigration, Refugeeism and The Boundary Event, is here at once material and immaterial. On the one hand for example, the wall event: a scar in the environmental landscape, a visual statement of one’s relationship with one’s neighboring communities across the region. On the other hand it could be an event in time and in duration. Twilight for example, figures prominently in Trinh T Minh-ha’s work as the fragile moment of a multiple encounter between day and night, between East and West. Realities change according to the shift of light, and meanings given to the same symbol may differ radically during daytime or nighttime. Between the diurnal and the nocturnal then, there is the third term.

Boundary events are also where endings pass into beginnings. Building upon themes present in Trinh T Minh-ha’s earlier work on hybridity and displacement in the median passage, and illuminating the ways in which “every voyage can be said to involve a re-siting of boundaries“, questions are raised so as to examine the cultural meaning and complexities of travel, immigration, home and exile.

Trinh T. Minh-ha is Professor of Rhetoric and of Gender and Women’s Studies at the University of California, Berkeley. A feminist theorist, award-winning filmmaker, visual artist, writer, composer, cultural critic, she is the author of several influential and highly regarded books, including When the Moon Waxes Red, Woman, Native, Other and The Digital Film Event. Her films include Reassemblage (1982), Surname Viet Given Name Nam (1989), The Fourth Dimension (2001), and Night Passage (2004). The seminars she offers at Berkeley focus on Third cinema, film theory and aesthetics, the voice in cinema, the autobiographical voice, critical theory and research, cultural politics and feminist theory.

Arranged by Clandestino Institute in collaboration with Glänta. This lecture marks the release of the Swedish translation of Elsewhere, Within Here, proudly published by Glänta produktion.