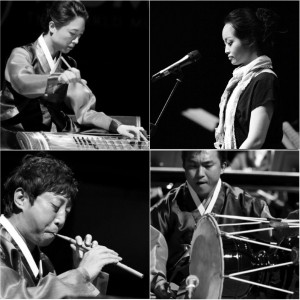 There are many ways to modernize traditional music. Using an unlikely instrument to re-interpret an old repertoir is one way: Bach on a sitar or Beatles on a bouzuki for instance. Another approach which may require harder work but at the same can make for a more interesting result, is to remain in one’s own musical language but to allow this system of sounds to be influenced by completely different, culturally remote forms of music. This is what Korean Tori Ensemble do.

The word tori derives from the various ways that the same musical tradition is interpreted in different regions of Korea. The group seeks new ways to approach these tori, and combines them with western musical dialects. The South Korean band includes among others Yoon Jeong Heo, geomungo – a korean zithre which she sometimes play in the conventional way, and occasionally using a number of effect pedals and a guitar amp. Young Chi Min plays the bamboo flute daegum and the chang-go, a hour glass-shaped drum. The most significant sound is produced by singer Kim Bo Ra, who has been awarded in a number of prestigious Korean folk music competitions.

The musicians produce intricate rhythms and occasionally what almost sounds like bluesy riffs in surprisingly natural symbiosis with the Korean repertoir.