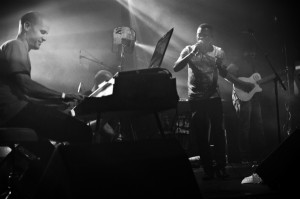 The story begins when electronic musician Pierre-Antoine Grison (a.k.a. Krazy Baldhead) moved to a new apartment in Paris. He heard strange music from the next apartment and one day Grison approached his neighbor on his way down the stairs, and asked what sort of instrument he was playing. The friendly neighbor, whose name was Thomas Guillaume, invited him over and showed gave a demonstration of his donso n’goni, a West African hunter’s harp.

They started experimenting and jamming together, and soon two malinese musicians – singer Gedeon Diarra and guitarist Moh Kouyate – joined the sessions. The quartet was looking for ways to combine traditional music from Mali and Kouyates exuberant guitar playing (on a distorted acoustic, without a pick) with Grison’s beats and riffs originating from house and club music. They all agreed that they did not want to be just another generic house music group that adds som African singing to spice things up, as a sort of exotic decoration. It took two years of searching before they found a working formula. The result has been compared with Amadou & Mariam’s colaboration with Damon Albarn, ”Sabali”: even though it is less pop, Donso is the same type of seamless, organic cross over between two musical languages. Based on the malinese hunting music, intense and hypnotic in itself, the music manages to create something entiely new related to house, electronica and fusion jazz. It is of course impossible to pinpoint Donso’s music genre wise. Their debut album ”Donso” (Comet 2010) is produced by Grison / Krazy Baldhead, but on stage they are a group without a given leader.